It Takes Two To Tango – Part 2

It Takes Two To Tango – Part 2

In our last theory about Michael Jackson having a twin brother we stated it would be our last post. Well apparently we both had our Nostradamus pants on, because it was our last post…on MJHD. We were banned from chat and from the forum, but that doesn’t stop us to write more about our theories for those who are interested.

In our last blog you can read we think Michael has a twin brother, Mike. Because we are unable to pull legal documents, we have to dig deeper into the performances and pictures that we can find on the internet. Now I have 2 versions of the HIStory tour, Live in Auckland and Live in Bucharest. I have always thought they were different, but now we decided to watch more closely. First thing that caught our eye was that the Michael Jackson on the Bucharest performence had a ring on his right hand. That would not be a strange thing, because he was married to Debbie Rowe during that time. But on the Auckland concert there is no ring… What also seems is that the MJ on the Bucharest concert has a rounder face and a wider nose.

Here are some video’s and pictures so you can see for yourself: 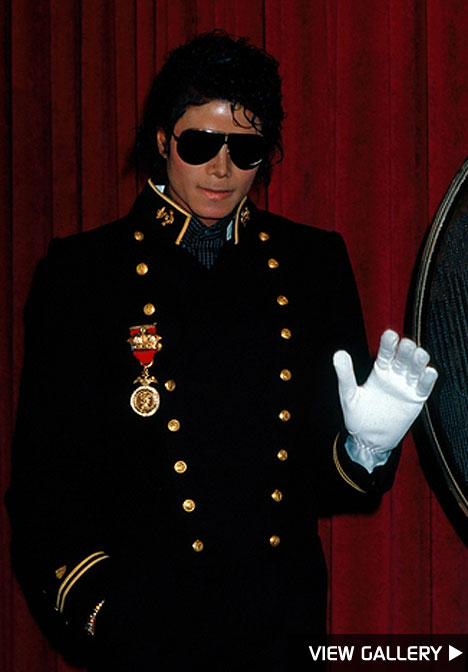 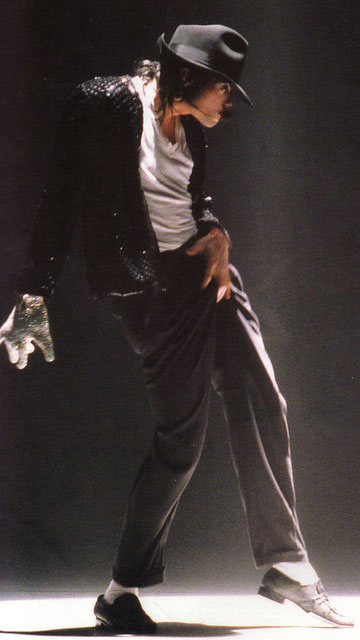 Now if we look at the This Is It poster, it looks like be are looking at MJ’s back, so that means the glove is on the right hand here:

We assume it is MJ’s back, but I think we can also make it his front, the way the silhouette is presented, so is the glove on both hands?

Let me also remind you of the back of the album again, where it says: Always great to sing with my brother. Brother, why not brothers? And what is with the added S in pains with Will you be there at the memorial?

Well, enough said about that, let’s see what else could support this theory. We watched the memorial again. A very interesting speech from Berry Gordy, we all already had agreed on that, but this part I didn’t notice before:

I must say that he’s had 2 personality’s. Off stage he was shy, softspoken and childlike. But when he took the stage in front of his screaming fans, he turned into another person. A master, a take-no-prisoners showman. It was like kill or be killed, (giggles) I mean Michael was awesome, totally in charge. In fact, the more I think and talk about Michael Jackson, I feel the King of Pop is not big enough for him. I think he is simply……I think he is simple the greatest entertainer that ever lived.

We always wondered why he had to giggle, but if this theory is true, this man MUST know the real deal and in that case it wouldn’t be weird if he had to giggle about his words. Also see how he repeats himself at the end.

Another thing that seems interesting, the message from Rebbie in the Golden Memorial booklet. Well actually the picture behind it. 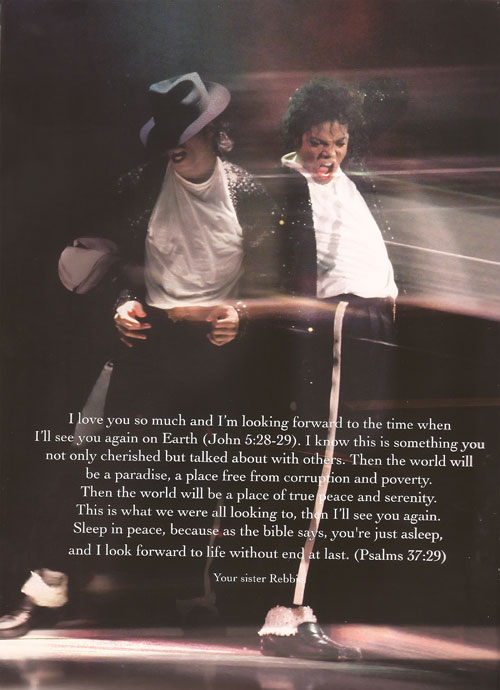 Another interesting picture is from MJ and Janet at the Legend Awards. 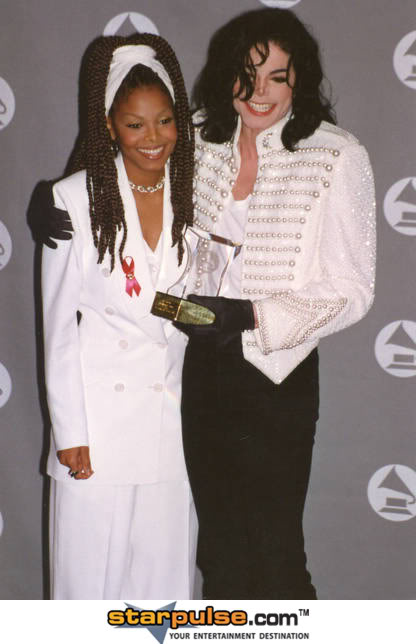 MJ is wearing 2 gloves, instead of one. LaToya also claims he’s buried in 2 gloves… Why did we all wonder? Well, maybe because this was a special award to them and the earned it both, but only one was able to pick it up. Maybe that’s the reason for wearing 2 gloves. As for the burial it could mean that the worked together as the King of Pop and he died, so they can live seperate lives.

And we have more! Look at the pictures of the brothers both at the memorial as at the burial: 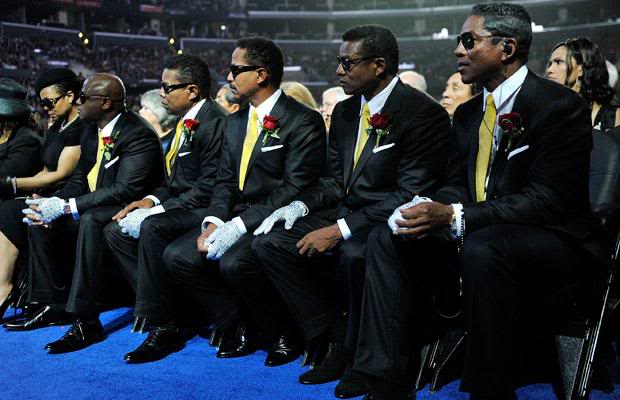 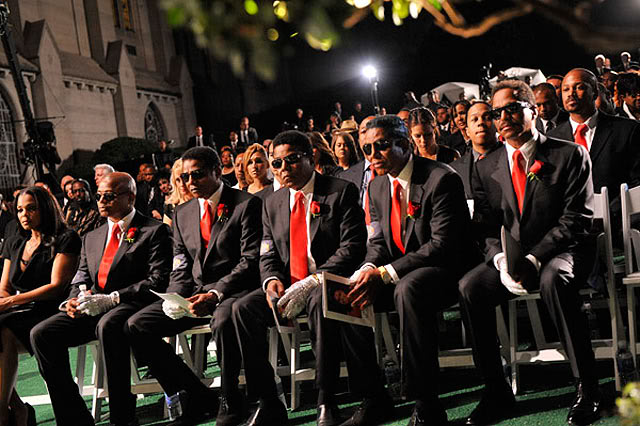 This is It, here we have a nice still from the movie: 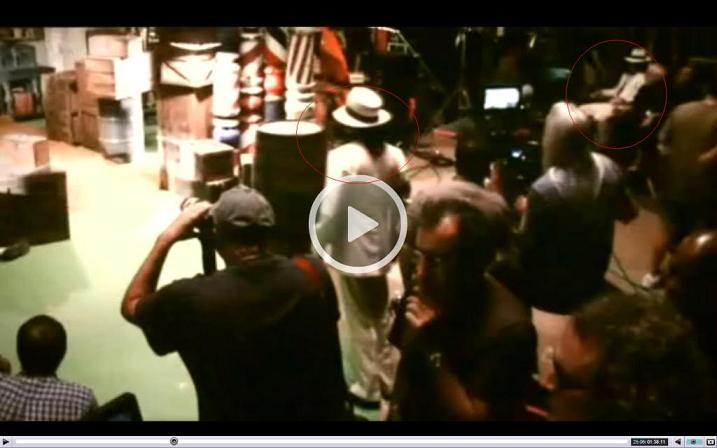 Now who is that? Hatman? I don’t think so, but we have some nice info on Hatman later in the post 😉

And even though we tried hard, it was not possible to match the chins:

An EXACT match on the noses of BAD-MJ and Captain EO-MJ, but the rest of the face is no match: 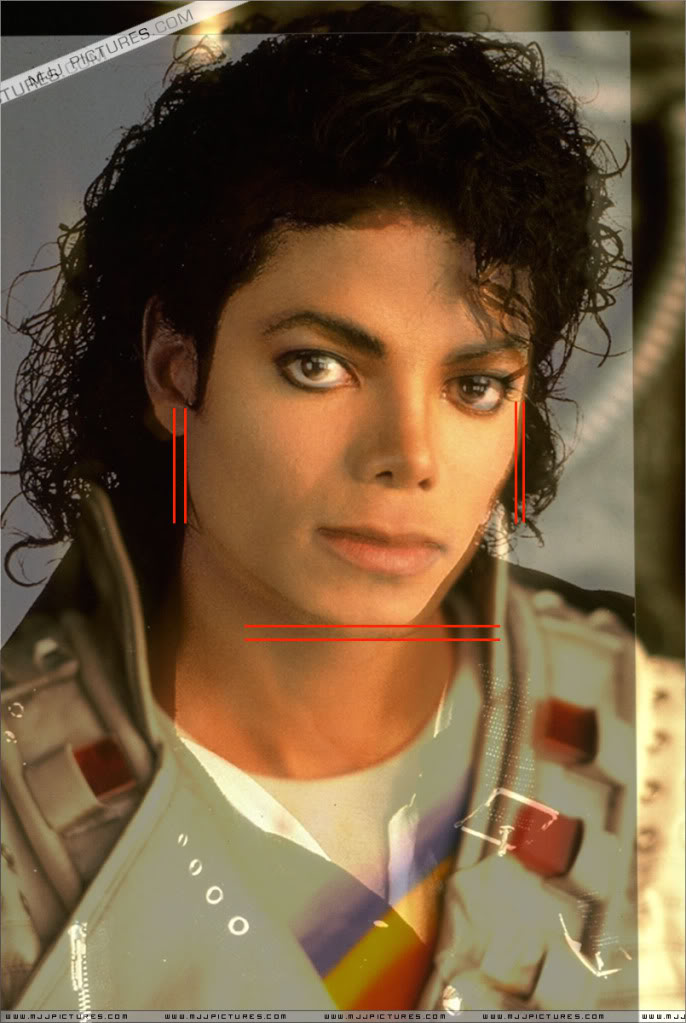 Now think of what there was said about the graves a the grand mausoleum. It’s pretty plausible that the Jacksons indeed bought the 13 graves at Forest Lawn. Why? Let’s count:

Maybe they have reburied Brandon there, could explain why Katherine was emotional and she and Joe didn’t attend the after party. It could also explain why we were not allowed to see more then we saw on tv.

An intersting few words from Liz Taylor too in The Telegraph on June 27, 2009

One day Michael suggested that he might drop by. Elizabeth said fine. He said: “May I bring my chimpanzee?” Elizabeth said, “Sure. I love animals.” Michael showed up holding hands with the chimp, Bubbles.
“We have been steadfast ever since,” Elizabeth said.
“Do you see much of Michael?”
“More of him than people realise – more than I realise,” she said.

Oh, and we promised an update on Hatman right? Well we said before that we think Hatman is Ashton Kutcher, at least the Hatman on the burial, see these pics: 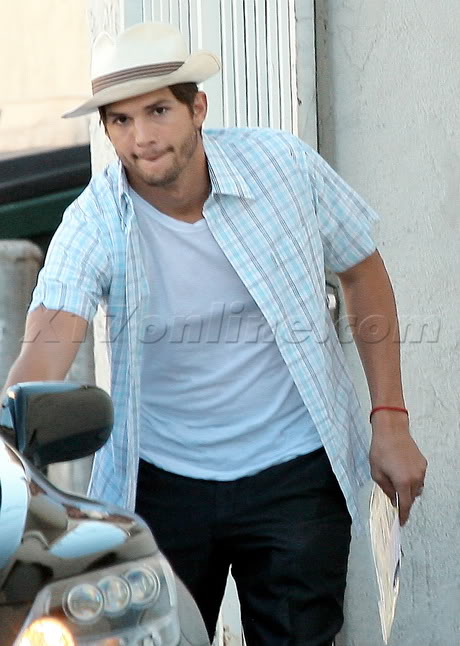 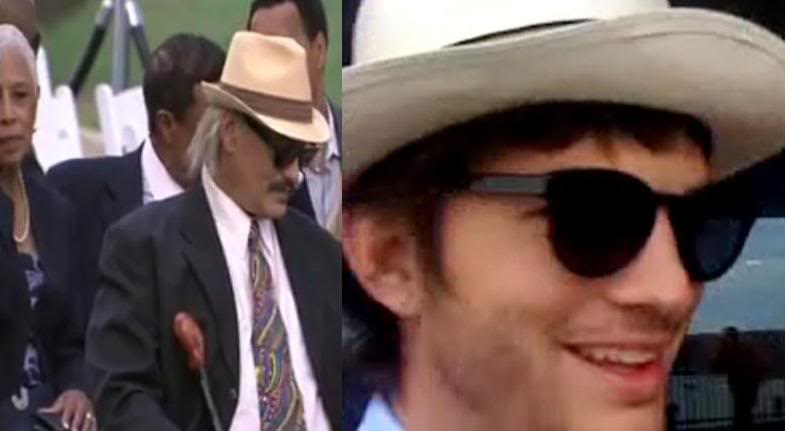 Now Ashton’s has a Twin Brother, his name? Michael… 😉

Edited because our bible google didn’t put the right name with the right picture.

Special thanks to Chappie and Wizard of Oz