It Takes Two To Tango…

It Takes Two To Tango…

The Truth, The Lies, The Guilt & Making up

Not to be rude, but for those that are ignorant and blind and have yelled at us about the Dave Dave thread, do not read further. You will not like this and you will probably not believe it. If you choose to read on and you will not see or agree, that is fine by us, but leave the personal attacks and bashing behind… So get your rain boots and your umbrella’s, ’cause here comes the storm…

First of all we wanted to say that this will be our last post, because this is it for us. We have been investigating this whole matter for 4 months and the outcome is brilliant, revealing and shocking. Our mouths were hanging on our laptops for hours, before we could even speak again. The story is sad, as well genius, why? Because this hoax did not start on June 25, 2009, it started much longer ago…

We have had help. We have been receiving information, photo’s, video’s, documents and clues for months that we could work with. These ‘plants’ as we call them, are legit, we have no doubt about that. Through this way we want to thank them all for their help and even the ones that were send to mislead us, because that kept us sharp. You all know who you are 😉

After our post about ‘Where the Wild Things Are’, we had a lot of comments about thoughts we shared with some people about the 2005 trial. Before you all will jump out of your panties, let us explain what our thoughts are and why we kept looking at the trial. Please keep in mind that this are still thoughts, we have no confirmation or proof at all about this, but it led us to the truth.

In 2003 we have all seen the Bashir tapes. The strange things in this interview is that Michael is holding hands with Gavin Arvizo. Why? Because of the accusations in 1993. Remember that he is a PR-genius. By holding the boys hand on tape and talking about sharing your bed, he must have known what would come next. He has been in the industry for so long, knows exactly what can come from statements you make in interviews. Also we assume there was not a non-airing clausal to the contract he had with Bashir, so he had no control over the broadcast, that seems odd for someone like Michael Jackson.

By investigating the trial, we searched for legal documents about the case and found a site called www.intelius.com. On this site you can search for Americans and their relatives and order their personal info. We searched for Michael J. Jackson and found him, but we also found something else…

This thread is about Michael Jackson and his twin brother: Mike Jackson. Think it’s BS? Look at what we found and then make up your mind. Do not stop reading here and make a bash-comment, read first and look at the obvious.

We searched Intelius with 4 person: Souza, Mo, Chappie and Wizard of Oz. Wiz led us to two Michael J Jacksons. With those, the search started.
Let’s start with Malachi Jackson, 51 years old, who caught our eye… Could Michael have a twin brother..?!

This was enough to contact MJHD member Peggy99 who had offered her help before in pulling birth records.
Peggy told me that her contact in the USA was unable to pull a birth record for Malachi Jackson. She was told that there isn’t even a birth certificate for Malachi Jackson, only a death certificate. The records showed that Malachi was born 08/29/1958, and passed 08/30/1958.

The Twin idea would explain so many things…and didn’t Marlon mention a twin brother at the memorial? We decided to dig some more…

This was enough to give Peggy another call, and to ask her if she could check for Mike J Jackson, born 08/29/1958. Soon after that Mo received an email from Peggy in which she wrote that Mike J Jackson has the correct date of birth. Bingo! Peggy even has mentioned him on the boards months ago, but was told this was another dead end.
Peggy and her contact in New York tried to obtain a birth certificate for Mike J Jackson, but all documents pertaining to the Jackson family are being kept under very tight wraps, and until now we have not received anything.

So…according to the info we got, Michael Jackson is one of a twin… Michael has a TWIN BROTHER, named Mike J Jackson. We were speechless, but at the same moment it made a LOT clear!

Let’s have a look at some pictures here… 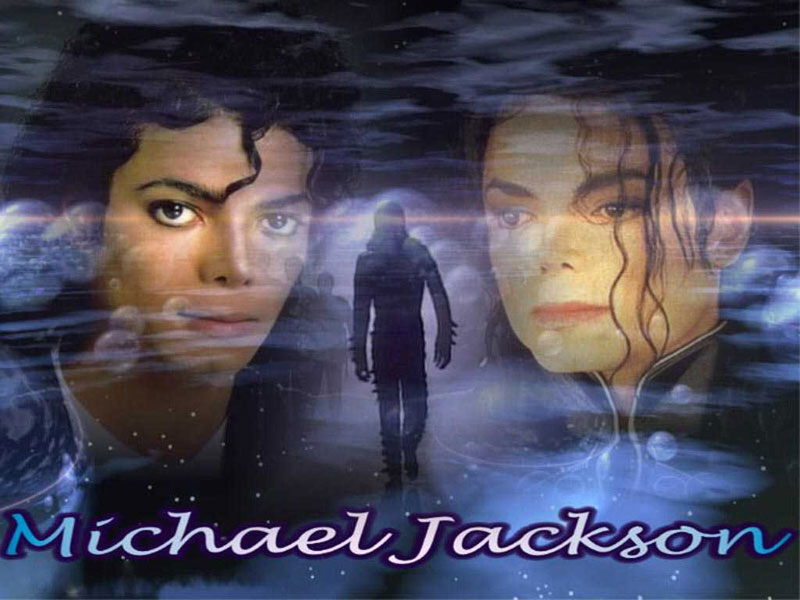 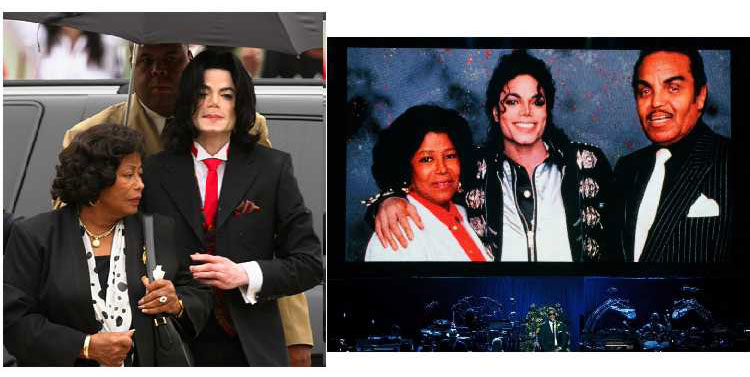 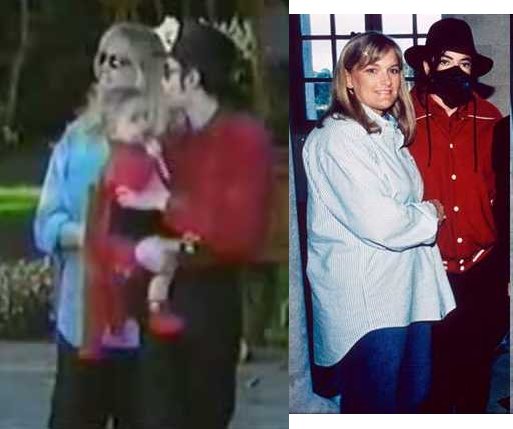 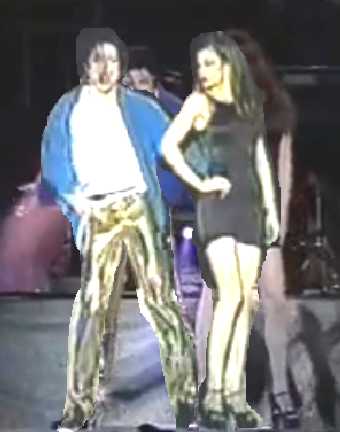 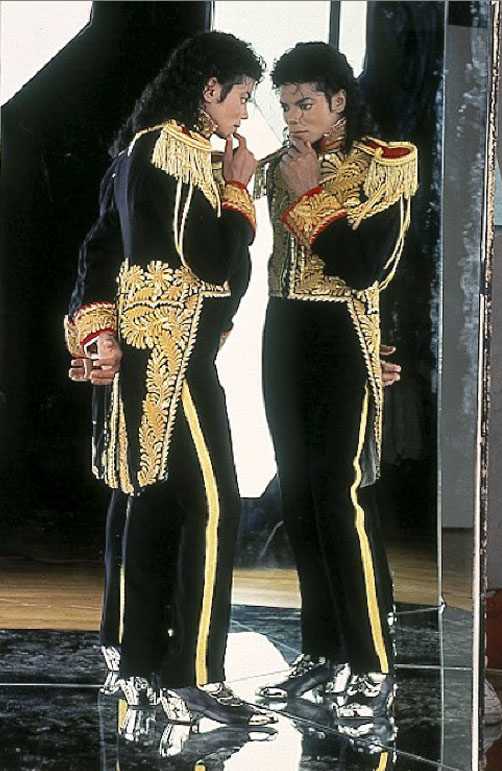 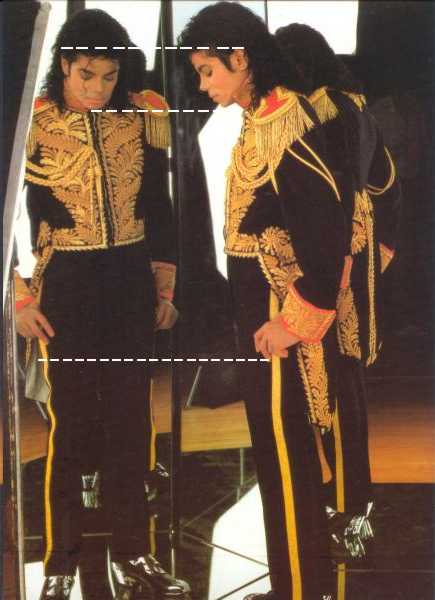 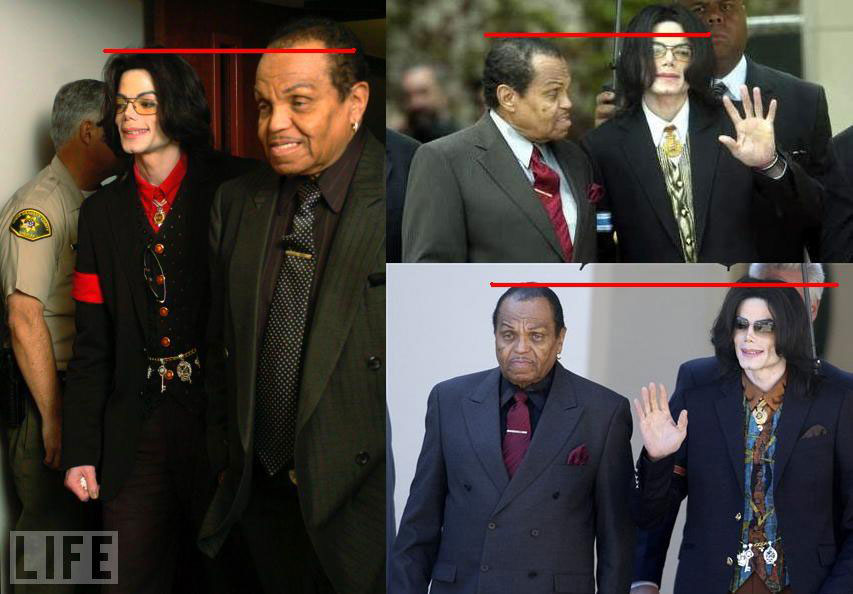 Now knowing this…let’s have a ‘second’ look at the lyrics of some songs:

Cry
Stories buried and untold
Someone is hiding the truth, hold on
When will this mystery unfold
And will the sun ever shine
In the blind man’s eyes when he cries

Now go through all your albums and listen to some songs with this knowledge… Also take a good look at the back cover of the This is It album: 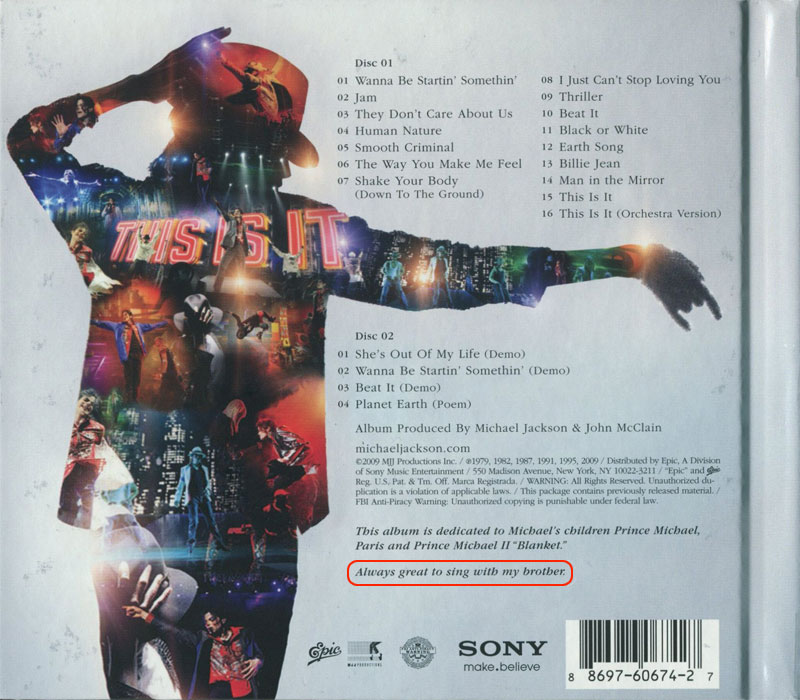 Having two MJ’s on this world would explain a lot of things. Confusions about the looks, about the weight and height, small upperlip/big upperlip, the high soft voice vs the deep low voice, you name it. It also explains all the 7’s in this hoax, Mike is the 7th brother…

For us the confirmation of this was when we saw both MJ’s at work in This Is It.

We think this is what Liza Minelli meant when she said: When the autopsu comes, all hell is going to break loose, so it’s a good thing we celebrate him now…

Imagine how it must have been like. Not able to live a normal life, never able to go and have a drink with your brother, always having to lie about everything… This is why we find so many clues in old material, they have been living a lie for decades.

Now will they come out? We don’t know for sure. We have our thoughts on it, but we can also understand that they would be too scared to come out, because the fans put MJ on such a high horse. Think about the threads on the forum about him smoking, or maybe having a secret child. That were things he would never do. Some of you said that if he would really have been disguising as Dave Dave at LKL, you would never have any respect for him anymore, what about this? They have deceived the world for so long, but do you blame them? Think about how hard it must be to get this truth out in the world…

In our darkest hour
In my deepest despair
Will you still care?
Will you be there?
In my trials
And my tribulations
Through our doubts
And frustrations
In my violence
In my turbulence
Through my fear
And my confessions
In my anguish and my painS
Through my joy and my sorrow
In the promise of another tomorrow
I’ll never let you part
For you’re always in my heart

Personal note from me:
Clearly, we are not done hoaxing yet…more to come